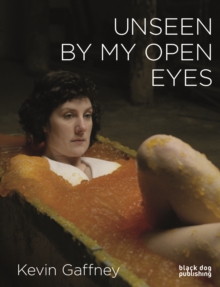 Featuring four films by the young Irish filmmaker Kevin Gaffney, Unseen By My Open Eyes is the first publication on the artist's work, exploring the psychological landscapes that the artist devises to explore the construction, projection and manipulation of identity.

Within the book, Gaffney's films are presented through a series of richly illustrated sections, providing an excellent insight into the artist's methodologies.

The book explores subjects ranging from: daily life in Iran; selfhood and military conscription in Taiwan; geographic, political and emotional separations in South Korea, with characters imagining what the moon looks like from North Korea; and food consumption in a self-sustaining militarised Ireland of the near future where climate change has benefited agricultural production.The book features English scripts of the five films, with an annex compiling the scripts in Korean, Chinese, Persian and Gaeilge (Irish Gaelic).Gaffney's works are contextualised through an accompanying essay by Irish critic Caoimhin Mac Giolla Leith.Gaffney was the first Irish recipient of a Sky Academy Arts Scholarship in 2015, and was an UNESCO-Aschberg laureate artist in residence at the National Museum of Modern and Contemporary Art's Changdong Residency in South Korea in 2014. His work features in the Irish Museum of Modern Art's collection, and solo exhibitions have been held at the Linenhall Arts Centre (Ireland), Millennium Court Arts Centre (Northern Ireland) and CAI02 Contemporary Art Institute (Japan).