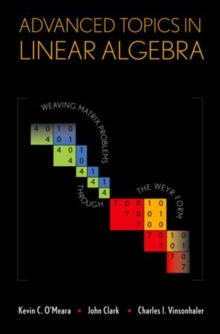 Advanced Topics in Linear Algebra presents, in an engaging style, novel topics linked through the Weyr matrix canonical form, a largely unknown cousin of the Jordan canonical form discovered by Eduard Weyr in 1885.

The book also develops much linear algebra unconnected to canonical forms, that has not previously appeared in book form.

The Weyr form clearly outperforms the Jordan form in many situations, particularly where two or more commuting matrices are involved, due to the block uppertriangular form a Weyr matrix forces on any commuting matrix.

In this book, the authors develop the Weyr form from scratch, and include an algorithm for computing it.

The Weyr form is also derived ring-theoretically in an entirely different way to the classical derivation of the Jordan form.

A fascinating duality exists between the two forms that allows one to flip back and forth and exploit the combined powers of each.

The book weaves together ideas from various mathematical disciplines, demonstrating dramatically the variety and unity of mathematics. Though the book's main focus is linear algebra, it also draws upon ideas from commutative and noncommutative ring theory, module theory, field theory, topology, and algebraic geometry. Advanced Topics in Linear Algebra offers self-contained accounts of the non-trivial results used from outside linear algebra, and lots of worked examples, thereby making it accessible to graduate students.

Indeed, the scope of the book makes it an appealing graduate text, either as a reference or for an appropriately designed one or two semester course.

A number of the authors' previously unpublished results appear as well.