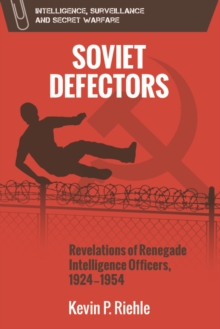 Part of the Intelligence, Surveillance and Secret Warfare series

This book identifies a group of those defectors from the Soviet elite - intelligence officers - and provides an aggregate analysis of their information to uncover Stalin's strategic priorities and concerns, thus to open a window into Stalin's impenetrable national security decision making.

This book uses their information to define Soviet threat perceptions and national security anxieties during Stalin's time as Soviet leader.