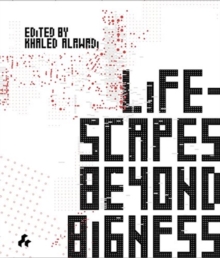 The world is becoming more urban and recent forms of development have had numerous negative environmental, energy, social, and economic consequences.

New approaches are necessary, urgently, in what we can consider humanity s rst urban century.

At a fundamental level, new developments in cities should be comfortable for people as well as safe, healthy, relatable, and stimulating.

The Arabian Gulf, in particular, faces amazing opportunities and challenges in the face of rapid urbanisation.

The Gulf states have the providence of abundant oil and gas supplies that generate wealth in the cities.

Meanwhile, the region is arid hot and dry with limited prime farmland.

Lifescapes Beyond Bigness explores alternative ways to make cities in the United Arab Emirates, a nation well-known for its large-scale and ambitious building endeavors.

Their ideas are deeply rooted in nature and culture.

Their goal is nothing less than a radical rethinking and re-orientation of the cities in the UAE away from the bigness of its recent past.

In many regards, this is a bold undertaking, even more audacious than the muscular high rises that dominate the skylines of Dubai and Abu Dhabi.