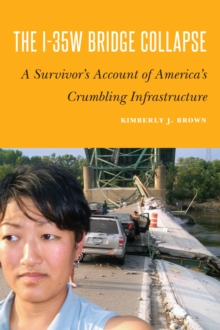 "A bridge shouldn't just fall down," Senator Amy Klobuchar said after the August 1, 2007, collapse of Minneapolis's I-35W eight-lane steel arch bridge, which killed thirteen motorists and left a collective wound on the city's psyche and infrastructure.

On her way to soccer practice with a fellow teammate, Kimberly J.

Brown experienced the harrowing collapse firsthand. Fortunately, she was one of the survivors. In The I-35W Bridge Collapse, Brown combines memoir and expose to provide a full account of the I-35W bridge collapse and its aftermath.

Weaving together multiple linked narratives in continuous sections like an unbroken bridge deck, Brown recounts her harrowing personal account of the collapse of the bridge and the deaths of thirteen motorists who plunged 114 feet into the Mississippi River; her own injury, trauma, and healing through advocacy; her investigation and correspondence with Thornton Tomasetti engineers; the false official account of the collapse and the eventual acceptance of its real causes; the ongoing decay of America's bridges; and the continuing failure of leaders to address this widespread issue across the country. After nearly ten years of research, Brown can now answer the question that had been haunting her ever since the tragedy: what could've been done?

This is the story of what happened to Brown, how it changed her life and so many others, and how it didn't have to happen.