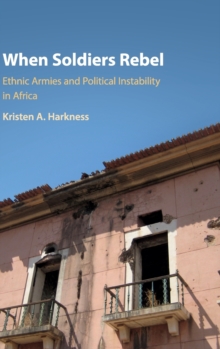 by Kristen A. (University of St Andrews, Scotland) Harkness

Military coups are a constant threat in Africa and many former military leaders are now in control of 'civilian states', yet the military remains understudied, especially over the last decade.

Drawing on extensive archival research, cross-national data, and four in-depth comparative case studies, When Soldiers Rebel examines the causes of military coups in post-independence Africa and looks at the relationship between ethnic armies and political instability in the region.

Focusing on rebellions to protect rather than change the status quo, Harkness sheds light on a mechanism of ethnic violence that helps us understand both the motivations and timing of rebellion, and the rarity of group rebellion in the face of persistent political and economic inequalities along ethnic lines.