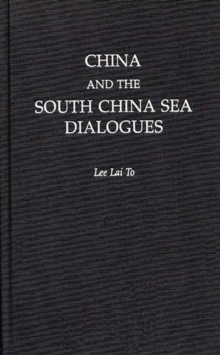 by Lai To Lee

Lee provides an in-depth analysis of China's diplomatic strategy in bilateral and multilateral negotiations on the South China Sea.

Based on both documentary research and the personal experiences of the author at conferences and meetings on the issue, Lee highlights the approach adopted by China in its dealings with other parties to the dispute.

While China prefers to conduct bilateral discussions, it has not ruled out multilateral talks and cooperation in the South China Sea.

However, there has been limited progress in these talks, especially those conducted at multilateral meetings.

As most of the claimants are from ASEAN, the book also examines Sino-ASEAN relations in general and explores how that would affect China's conduct in South China Sea discussions.

An important study for scholars, and policy makers involved in security issues in the Asia Pacific.