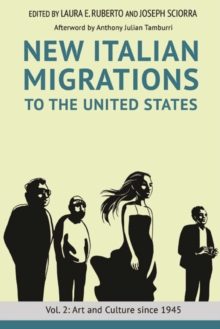 New Italian Migrations to the United States : Vol. 2: Art and Culture since 1945 Hardback

This second volume of New Italian Migrations to the United States explores the evolution of art and cultural expressions created by and about Italian immigrants and their descendants since 1945.

The essays range from an Italian-language radio program that broadcast intimate messages from family members in Italy to the role of immigrant cookbook writers in crafting a fashionable Italian food culture.

Other works look at how exoticized actresses like Sophia Loren and Pier Angeli helped shape a glamorous Italian style out of images of desperate postwar poverty; overlooked forms of brain drain; the connections between countries old and new in the works of Michigan self-taught artist Silvio Barile; and folk revival performer Alessandra Belloni's reinterpretation of tarantella dance and music for Italian American women.

In the afterword, Anthony Julian Tamburri discusses the nomenclature ascribed to Italian American creative writers living in Italy and the United States.