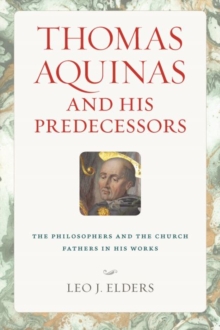 Thomas Aquinas and His Predecessors : The Philosophers and the Church Fathers in His Works Hardback

Thomas Aquinas and His Predecessors takes us on a voyage through the history of philosophical thought as present in the works of Thomas Aquinas.

It is a synthetic presentation of the works and thought of the great predecessors of Aquinas, as he knew and used them.

This is the first time that a comprehensive survey of the works of these influential thinkers that were quoted by St.

Thomas Aquinas is presented in a readable form. Throughout Aquinas's corpus he commented on the works of Aristotle, Boethius and Dionysius, showed great interest in and use of the writings of St.

Augustine, St. Jerome, St. John Chrysostom, Gregory the Great and John Damascene, as well as the great Arab and Jewish scholars of the tenth to the twelfth centuries.

However, the precise extent of Aquinas's knowledge and use of these various writings has not always been clear. In Thomas Aquinas and His Predecessors chapters are devoted to Thomas's relationship with stoicism, Cicero and Seneca, and neo-platonist thought.

For this volume, Dr. Elders has researched the thousands of quotations of these different authors in the works of Aquinas.

The references reveal the admirable knowledge Thomas had of the doctrine of the different authors, his evaluation of them, his agreement and disagreement.

In sum, the book is an illustration of how the philosophical and theological works of St.

Thomas Aquinas lie in close scholarly, philosophical, and theological proximity with the writings and thought of his great predecessors. 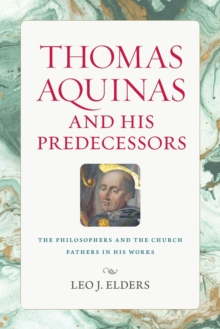 Thomas Aquinas and His Predecessors 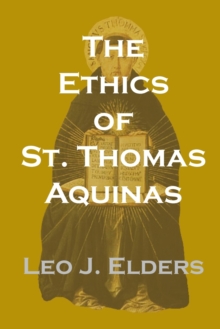 The Ethics of St. Thomas Aquinas