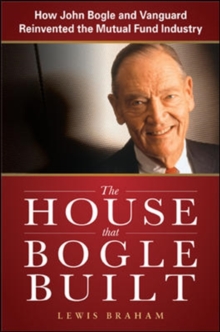 The House that Bogle Built: How John Bogle and Vanguard Reinvented the Mutual Fund Industry Hardback

"One of the best financial books of 2011."National PostJohn Bogle's journey from financial-industry pioneer to one of its toughest criticsArguably the greatest shareholder advocate in the history of Wall Steet, John Bogle not only created the first index mutual fund but has become the primary voice for change in an industry plagued by excess and complacency.

Bogle stumbled upon mutual funds by accident in 1949 as a college student at Princeton.

In his junior year, he read a Fortune article about the burgeoning fund industry that sparked his interest, and he wrote his now famous senior thesis about it. What began as an intellectual pursuit would turn into Bogle's life mission.

The House That Bogle Built chronicles the years of Bogle's development from college whiz kid into a titan of the mutual fund industry and shareholder advocate-highlighting his creation of the Vanguard Group and the Vanguard 500 Index Fund and his frequent battles to shake up the status quo.

It takes you through the two decades he spent running Vanguard, until his forced retirement in 1999, and discloses what he thinks about the fund industry today. Bogle has always stood out for his extraordinary talents in math, analysis, management, and investing.

But his most noteworthy trait is his most basic: his humanism in an industry not exactly famous for placing people over profit.

It's Bogle's dedication to clients' interests above all else that has earned him the reputation as the "conscience" of the investing industry. In his ninth decade of life, Bogle is remarkably candid about the role he plays at Vanguard today-and about his opinion of Jack Brennan, his successor. "How do you keep Vanguard a place where judgment has at least a fighting chance to triumph over process?" he asks.

Skeptical but never defeatist, Bogle maintains a retired-but-active status at the company, keeping a close watch over those now at the helm of Vanguard. The House That Bogle Built reveals one of the investing world's most fascinating and complex figures.

A dogged advocate of shareholder democracy, he was a self-confessed "dictator" at Vanguard.

A brilliant mathematician, he is more interested in people than numbers.

Fiercely competitive, he bemoans the cut-throat approach that drives his industry of choice.

Always, though, Bogle places the good of the client before anything else-a practice that has become steadily rarer in his business. The House That Bogle Built provides an insightful look at the past, present, and future of one of today's largest industries, through the eyes of one of its most influential pioneer.