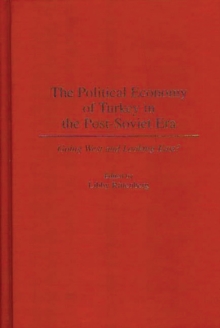 The Political Economy of Turkey in the Post-Soviet Era : Going West and Looking East? Hardback

The collapse of the Soviet Union and the Soviet bloc had a profound effect on Turkey economically and politically.

On the one hand, the collapse further marginalized Turkey's position in Western Europe, as some of the newly liberated Central and Eastern European countries raced ahead of Turkey to join the European Union.

On the other hand, the collapse presented Turkey with new opportunities and challenges stemming from geographic proximity and cultural/historical ties with countries that emerged from the Soviet bloc and from the former Soviet Union.

In articles focusing on the 1990s and beyond, this book explores how the economic and political fortunes of Turkey have changed since the end of the Cold War. Two main sections of the book examine Turkey's relations with the European Union and with the former Soviet Union and Soviet bloc countries.

Each section opens with a chapter providing an overview of Turkey's political relationship with the respective region, followed by chapters that examine facets of the politico-economic relationships.

Located in a potentially volatile portion of the world, Turkey plays an important role in maintaining peace and prosperity in its region.

The analysis in this volume allows an understanding of the critical factors that influence the political economy of Turkey, and therefore, its ability to contribute to world peace and stability.