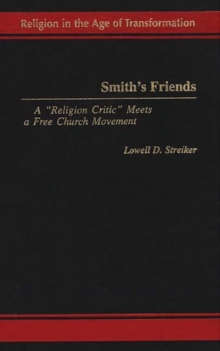 Founded in Norway more than 90 years ago, it is a church without membership rolls, clergy, central administration, tithing, or even a name.

On a worldwide basis, some 30,000 people participate in more than 200 churches in 50 countries. As a phenomenologist of religion, Streiker attempts to be descriptive, analytic, and constructively critical.

In order to set Smith's Friends in historical, social, and religious perspectives, he first examines their similarities to and differences from earlier Norwegian revival movements.

He then provides a detailed phenomenological report on Smith's Friends, based on field study in America and Europe. He examines their worship, hymnody, theology, and their everyday way of life.

As a friendly critic, Streiker entertains the hope that Smith's Friends will come out of their small-church shell and actively engage Christendom and the world.

If they do, Streiker believes we would all be better impressed by the influence of this extremely positive force for spiritual renewal.