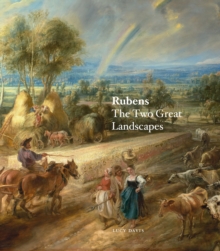 Rubens: The Two Great Landscapes is a handsomely illustrated monograph that examines in depth Rubens's two greatest landscape paintings: A View of Het Steen in the Early Morning and The Rainbow Landscape.

Painted as pendants, the pair have been in London since 1803, when they were separated, the former eventually entering the collection of the National Gallery and the latter that of the Wallace Collection.

The book puts the creation of these two landscapes into the full context of Rubens's later life and his semi-retirement.

It demonstrates how they are the zenith of his achievements as a landscape painter and explores how he drew skilfully on Flemish influences, including Bruegel, in creating two highly original compositions. Written to engage and appeal to the non-specialist reader and academic alike, the book makes an important contribution to scholarship in the field, including original technical research and new photography that show how these complex compositions evolved iteratively as the panels onto which they were painted were expanded.

It also presents an updated and almost complete history of the provenance of the two paintings describing their passage through eminent collections from the time of Rubens's death until they reached their respective collections in London, separated by less than a mile.