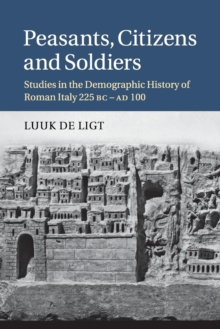 Recent years have witnessed an intense debate concerning the size of the population of Roman Italy.

This book argues that the combined literary, epigraphic and archaeological evidence supports the theory that early-imperial Italy had about six million inhabitants.

At the same time the traditional view that the last century of the Republic witnessed a decline in the free Italian population is shown to be untenable.

The main foci of its six chapters are: military participation rates; demographic recovery after the Second Punic War; the spread of slavery and the background to the Gracchan land reforms; the fast expansion of Italian towns after the Social War; emigration from Italy; and the fate of the Italian population during the first 150 years of the Principate.