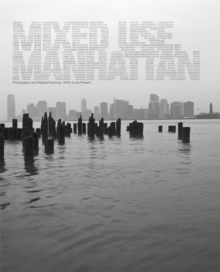 Mixed Use, Manhattan : Photography and Related Practices, 1970s to the Present Hardback

How New York artists have made use of the city's run-down lofts, neglected piers, vacant lots, and deserted streets. When the real estate bust of the 1970s hit New York City, artists found their own mixed uses for the city's run-down lofts, abandoned piers, vacant lots, and deserted streets, and photographers and filmmakers documented their work.

Gordon Matta-Clark turned a sanitation pier into the celebrated work Day's End, and Betsy Sussler filmed its making; Harry Shunk made a photographic series from Willoughby Sharp's Projects: Pier 18 (which included work by Vito Acconci, Mel Bochner, Dan Graham, Gordon Matta-Clark, and William Wegman, among others); Cindy Sherman staged some of her Untitled Film Stills on the same city streets.

Mixed Use, Manhattan documents and illustrates the most significant of these projects as well as more recent works by artists who continue to engage with the city's public, underground, and improvised spaces.

The book (which accompanies a major exhibition) focuses on several important photographic series: Peter Hujar's 1976 nighttime photographs of Manhattan's West Side; Alvin Baltrop's Hudson River pier photographs from 1975-1985, most of which have never before been shown or published; David Wojnarowicz's Rimbaud in New York (1978-1979), the first of Wojnarowicz's works to be published; and several of Zoe Leonard's photographic projects from the late 1990s on.