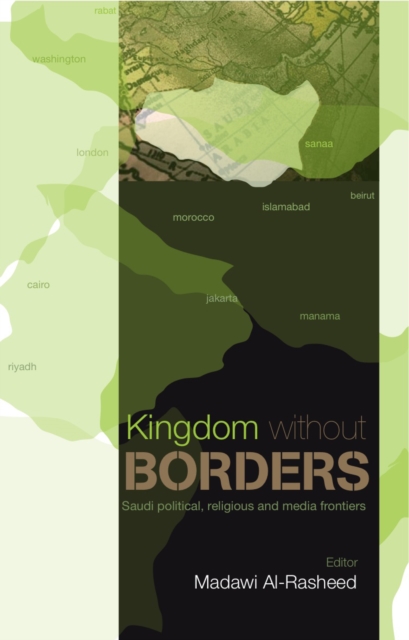 From Tangier to Jakarta, and from Western capitals to those of the Arab world, Saudi Arabia has confirmed its status as a kingdom without borders.

Its political influence, religious expansion and media empires are now applauded, debated or contested and both local recipients of Saudi largesse and governments enmeshed in Saudi agendas debate a phenomenon that so far has attracted more sensational reporting than serious scholarly analysis. "Kingdom Without Borders" is the first volume to shed light on this growing regional and international power and its ambitions to project its influence beyond its frontiers in three interrelated spheres of activity.

This volume brings together established scholars from Europe, the US, the Middle East and Asia to map the historical roots and contemporary manifestations of Saudi expansionism.Combining both top-down and grass roots analysis, contributors interrogate the reality and impact of Saudi transnational connections on local politics, religious affiliation and media genres.

This exploration leads to a reassessment of the changing nature of state and society in Saudi Arabia in an age of globalisation.

It highlights contradictions within Saudi Arabia with the emergence of multiple actors in the state and the consolidation of new non-state actors who, thanks to a second oil boom, may either consolidate or subvert the state.

Contributors also trace the impact of Saudi religious, financial and political influence on receiving societies, - including Yemen, the USA and Lebanon - their objective being to move the discussion away from accusations and counter accusations about support for terrorism to offer a nuanced approach to how local contexts are shaped by external actors in a globalised world.