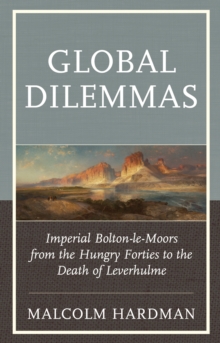 Global Dilemmas : Imperial Bolton-le-Moors from the Hungry Forties to the Death of Leverhulme Hardback

No more than there can be time without space can there be history without locality.

This book takes a road less traveled into a locality that provides fresh insights into our global dilemmas. Bolton-le-Moors was a global center of cotton, coal, and engineering, whose factory engines were the beating heart of the Victorian world.

Commanding the widest range of trades of any town in the Empire, it specialized in papermaking, from pawn tickets to banknotes, via newspapers and syndicated fiction.

Bolton's printed culture was founded on traditions that made it a bulwark of parliamentary puritanism in the days of Reformation and Civil War.

These traditions increasingly confronted global dilemmas that the town's own inventiveness and entrepreneurship had helped create: yet its high moorlands also provided a breathing space to generate imaginative spiritual, political, and practical remedies.

Global Dilemmas completes the account of Bolton writing initiated in A Kingdom in Two Parishes and continued in Classic Soil: an arc of discourse from Thomas Lever (1521-77), whose social experiments provided the model for the Protestant colonization of the New World, to his kinsman W.