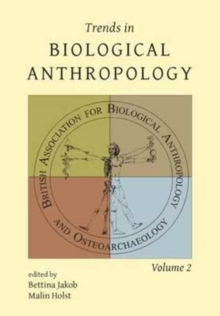 Part of the Trends in Biological Anthropology series

The articles included in this volume were all presented at the 15th annual British Association for Biological Anthropology and Osteoarchaeology (BABAO) conference held at the University of York on the 13th and 15th of September 2013.

Ten papers are presented, on a range of topics and themes, including that of 'Constructing Identities: Ethnicity and Migration' exploring theoretical approaches to the multiple identities of the body and multidisciplinary approaches to investigating the African origin of African American communities in parts of South America.

Papers exploring the theme 'Treatment of the Body: Understanding and Portrayals' focus on the visibility of prehistoric burial practice in Britain and the Levant (the 'invisible dead'), and evidence for diversity in late medieval Christian burial practice in Taunton, Somerset.

Three papers are incorporated in the theme 'Investigating Lifeways: Diets, Disease and Occupations', focusing on ancient DNA to investigate Mycobacterium tuberculosis from 18th century mummies from Hungary; a bioarchaeological perspective on military communities in Roman London; and a methodological approach to testing a faster method for recording past activity-patterns in skeletal remains.