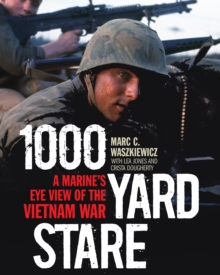 A Marine's eye view of the Vietnam War through hundreds of personal photos Marc Waszkiewicz served three combat tours in Vietnam ('67-'69), first on a fire support base, then in the field as an artillery forward observer.

He made thousands of photos exploring the beauty, drudgery, hilarity, and horror of the experience. 1000 Yard Stare collects his best photos, offering an unvarnished, compassionate, eyes-wide-open look at life in country and at the young men who served.

This is a unique visual memoir of the war, featuring Marines on the base--engaged in daily routines, playing music, cards, and football, writing letters home, drinking, and going on leave--and in the bush--interacting with the locals, searching for and battling the enemy, interrogating VC captives, and mourning the loss of their brothers in arms.

We see medics treating POWs, injured locals, and Marines, a gunner calculating ranges with pencil and protractor, and a chaplain conducting a battlefield mass, friends smoking Mary Jane while pretending to fish, base perimeters laced with barbed wire, and watchtowers in silhouette at twilight.

We see young men being young men during their tours in country.

The final chapters detail Marc's postwar years as he tries to come to terms with his experiences and help others to do the same, a string of poignant pilgrimages to The Wall in Washington DC, and a return trip to Vietnam. 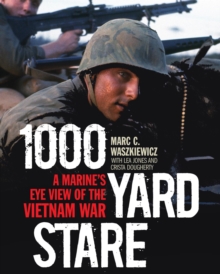