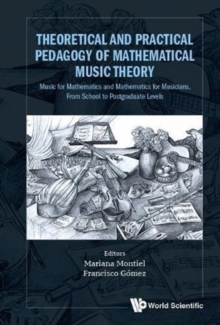 Theoretical And Practical Pedagogy Of Mathematical Music Theory: Music For Mathematics And Mathematics For Music, From School To Postgraduate Levels Hardback

During the past 40 years, mathematical music theory has grown and developed in both the fields of music and mathematics.

In music pedagogy, the need to analyze patterns of modern composition has produced Musical Set Theory, and the use of Group Theory and other modern mathematical structures have become almost as common as the application of mathematics in the fields of engineering or chemistry.

Mathematics students have seen in Music in Mathematics courses, how their accumulated knowledge of abstract ideas can be applied to an important human activity while reinforcing their dexterity in Mathematics.

Similarly, new general education courses in Music and Mathematics are being developed and are arising at the university level, as well as for high school and general audiences without requiring a sophisticated background in either music nor mathematics.

These courses and projects have been implemented in the USA, in China, Ireland, France, Australia, and Spain.The objective of this volume is to share the motivation and content of some of these exciting, new Mathematical Theory and Music in Mathematics courses while contributing concrete materials to interested readers.