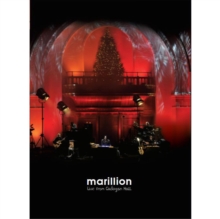 The British rock group captured live at London's Cadogan Hall on their 'Less Is More' acoustic tour in December 2009.

This two-volume set features their 'Less Is More' album played in its entirety, plus a number of Marillion classics re-interpreted with the same acoustic treatment.

Featured songs include 'Out of This World', 'This Is the 21st Century' and 'No One Can'.