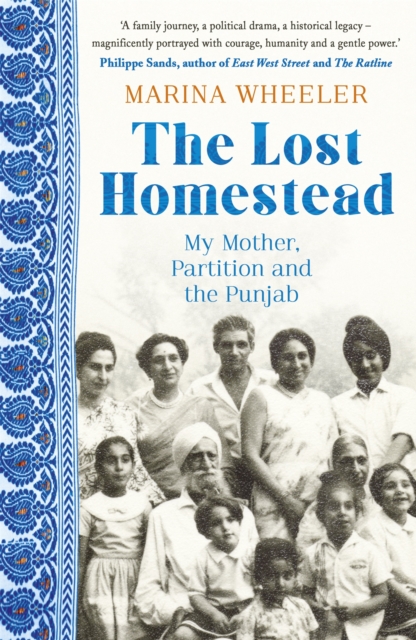 The Lost Homestead : My Mother, Partition and the Punjab Paperback / softback

'Deeply touching.' - Daily Mail'A personal, sometimes harrowing history of partition... a writer well worth reading.' - The Times'A deeply personal story of identity and a highly relatable journey for many in the diaspora...

An intimate and inspiring portrayal of how a woman made her own world as nations and empire were made and unmade.' - Dr Shruti Kapila, Lecturer in Modern History, University of Cambridge'This book is more than a family memoir - it is an insightful glimpse into the way small worlds are forever changed by the impersonal currents of history.' Shashi Tharoor, author of Inglorious Empire: What the British Did to India***On 3 June 1947, as British India descended into chaos, its division into two states was announced. For months the violence and civil unrest escalated.

With millions of others, Marina Wheeler's mother Dip Singh and her Sikh family were forced to flee their home in the Punjab, never to return.

As an Anglo-Indian with roots in what is now Pakistan, Marina Wheeler weave's her mother's story of loss and new beginnings, personal and political freedom into the broader, still highly contested, history of the region.

We follow Dip when she marries Marina's English father and leaves India for good, to Berlin, then a divided city, and to Washington DC where the fight for civil rights embraced the ideals of Mahatma Gandhi.

But above all it is about coming to terms with the past, and about the stories we choose to tell about ourselves.