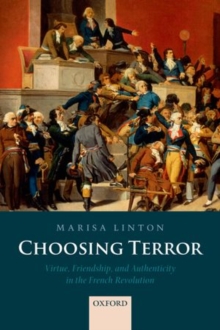 These men led the Jacobin Club between 1789 and 1794, and were attempting to establish new democratic politics in France.

Exploring revolutionary politics through the eyes of these leaders, and against a politicalbackdrop of a series of traumatic events, wars, and betrayals, Marisa Linton portrays the Jacobins as complex human beings who were influenced by emotions and personal loyalties, as well as by their revolutionary ideology. The Jacobin leaders' entire political careers were constrained by their need to be seen by their supporters as 'men of virtue', free from corruption and ambition, and concerned only with the public good.

In the early stages of the Revolution, being seen as 'men of virtue' empowered the Jacobin leaders, and aided them in their efforts to forge their political careers.

However, with the onset of war, there was a growing conviction that political leaders who feigned virtue were 'the enemy within',secretly conspiring with France's external enemies.

By year two, the year of the Terror, the Jacobin identity had become a destructive force: in order to demonstrate their own authenticity, they had to be seen to act virtuously, and be prepared, if the public good demanded it, to denounce anddestroy their friends, and even to sacrifice their own lives.

This desperate thinking resulted in the politicians' terror, one of the most ruthless of all forms of terror during the Revolution.

Choosing Terror seeks neither to cast blame, nor to exonerate, but to understand the process whereby such things can happen.