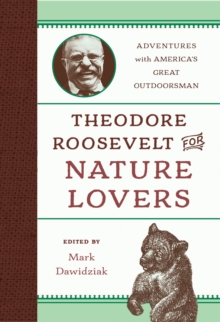 For history and nature fans*Theodore Roosevelt is one of the most beloved U.S. presidents of all time. *Handsomely designed with more than 40 illustrations and photographs. *A nice gift for history buffs and naturalists. In addition to being a politician, frontiersman, and rancher, Roosevelt was an enthusiastic hunter who fought passionately for conservation.

He played a significant role in setting aside land for the national parks.

He participated in expeditions to benefit the New York Museum of Natural History and the Smithsonian, and while in the White House, his children enjoyed the company of a menagerie of ponies, cats, dogs, lizards, rabbits, a macaw, snakes, and guinea pigs.

Theodore Roosevelt for Nature Lovers is a collection of delightful anecdotes-including the famous story about the "Teddy" bear-that reveal the Bull Moose's ongoing fascination with the natural world. Mark Dawidziak is the TV critic for the Cleveland Plain Dealer and the author of many books, including Mark Twain for Cat Lovers (Lyons).

He lives in Cuyahoga Falls, Ohio.