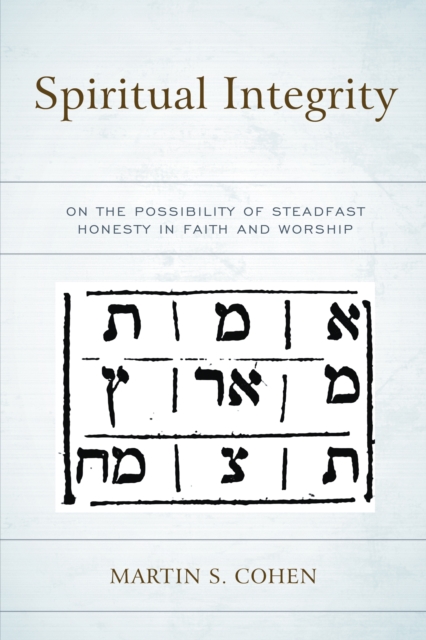 Spiritual Integrity : On the Possibility of Steadfast Honesty in Faith and Worship Paperback / softback

In Spiritual Integrity, Martin S. Cohen argues that it is possible for a serious commitment to religion-including to ritual, dogma, and prayer-to co-exist with a parallel commitment to the absolute integrity of the intellect.

Writing as a working rabbi with almost four decades of experience in the pulpit, but also bringing to bear a lifetime of scholarly research into the history of Judaism, Cohen uses his own faith as the framework for his proposals and shows convincingly that although the concept of faith is regularly invoked precisely to justify avoiding honesty in religion, there also exists the possibility of using the traditional language of religious commitment to live wholly honestly in the world as a person of faith.

Cohen uses all sorts of examples drawn from Judaism to make his point, but his book is not about Judaism, per se, however, but rather is a call to arms for people of all faiths-or no specific faith-to recognize that religion that, if embraced openly and honestly, can also lead to the embrace of a serious kind of spirituality anchored in frankness, honesty, and the renunciation of gullibility.

Teaching would-be persons of faith how to move forward from a starting-gate fashioned of those specific values as pilgrims seeking redemption honestly and honorably-and fully imbued with what the author calls spiritual integrity-that should be the task of the world's spiritual leaders.

Could it actually be possible to be a person of deep, abiding faith without feeling a concomitant need to profess belief in principles that there simply is no specific way to prove-and which could therefore just as easily be false as true?

Cohen argues that it is more than possible to aspire to that level of honesty in religion and Spiritual Integrity is his attempt to prove that specific point!