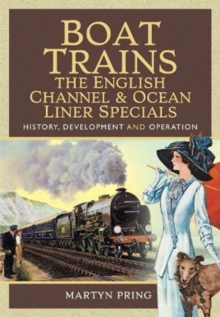 In many ways this title featuring the evolution of cross-channel boat trains and the many dedicated services responsible for moving international passengers to and from trans-Atlantic steamers, is an extension of luxury railway travel.

But that's not the full story as it encapsulates more than 125 years of independent and organised tourism development.

At the end of the nineteenth century, faster and more stable twin-screw vessels replaced cross-channel paddlers resulting in a significant expansion in the numbers of day excursionists and short-stay visitors heading to Belgium, France and the Channel Islands.

Continental Europe, as it had done since the end of the Napoleonic Wars beckoned, introducing ideas of modern-day mass tourism. Numerous liners bestriding the globe were British domiciled.

Major ports became hives of commercial activity involving moving freight and mail, as well as transporting all manner of travellers.

Not only was there intense competition for passenger traffic between the Old and New World and Britain's imperial interests, greater numbers of well-heeled tourists headed off to warmer winter climes, and also experimented with the novel idea of using ocean steamers as hotels to visit an array of diverse destinations.

Cruise tourism and the itinerary had arrived as 'Ocean Special' boat trains became essential components of railway and port procedures. Whilst some railway operations were dedicated to emigrant traffic, continental and ocean liner boat trains were also synonymous with the most glamorous travel services ever choreographed by shipping lines and railway companies working closely in tandem.

This well illustrated book explores the many functions of boat train travel.