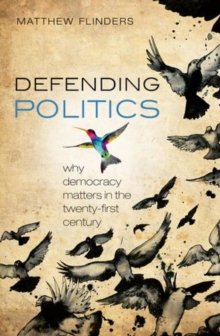 by Matthew (Professor of Politics, University of Sheffield) Flinders

If the twentieth century witnessed the triumph of democracy then something appears to have gone seriously wrong in the twenty-first.

Citizens around the world have become distrustful of politicians, sceptical about democratic institutions, and disillusioned about the capacity of democratic politics to resolve pressing social concerns.

Defending Politics meets this contemporary pessimism about the political process head on.

Matthew Flinders makes a highly unfashionable but profoundly important argument of almost primitive simplicity: democratic politics delivers far more than most members of the public appear to acknowledge and understand.

If more and more people are disappointed with what modern democratic politics delivers, then is it possible that the fault lies with those who demand too much, fail to acknowledge the essence of democratic engagement, and ignore the complexities of governing in the twentiethcentury, rather than with democratic politics itself?

Is it possible that the public in many advanced liberal democracies have become 'democratically decadent' in the sense that they take what democratic politics delivers for granted?

Would politics be interpreted as failing a little less if we allspent a little less time emphasizing our individual rights and a little more time reflecting on our responsibilities to society and future generations? This book provides an honest account of why democratic politics matters and why we need to reject the arguments of those who would turn their backs on 'mere politics' in favour of more authoritarian, populist or technocratic forms of governing.

In rejecting fashionable fears about the 'end of politics' and daring to suggest that the public, the media, pressure groups, academics and politicians are all part of the problem as well as part of the cure, it provides a fresh, provocative, and aboveall optimistic view of the achievements and future potential of democratic politics.