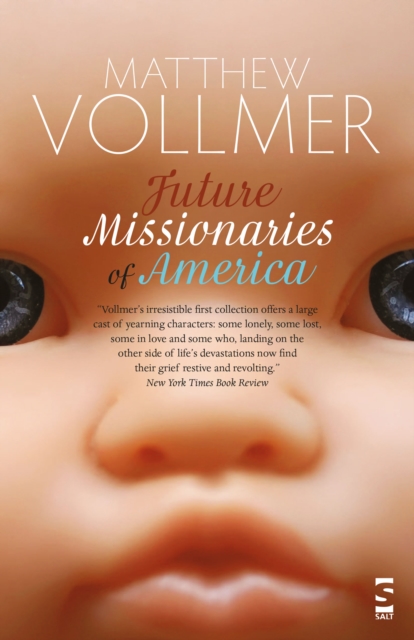 The short stories in Matthew Vollmer's infectious debut collection include a gambling addict who distractedly tries to support his son's attempt at an extreme world record, a widow seeking solace in the family lake house who instead finds her son with another man, and an inept pair of home economics students who struggle to repair their damaged robot baby. A waiter at Yellowstone National Park seeks consolation in the arms of his dead friend's girlfriend.

A young woman vacationing in Idaho becomes obsessed with a female poet and her adopted child.

A deadbeat bus-driver with a gambling addiction watches his son attempt the impossible at the X Games.

A temp in New York City distributes his will and testament to twenty-seven strangers, hoping to convince one of them to be its executor.

These are just some of the compellingly odd characters found in the pages of Matthew Vollmer's brilliant debut collection, Future Missionaries of America.

Taking us from a Seventh Day Adventist boarding school to a traveling exhibition of plasticine bodies, from the moonlit paths of Yellowstone National Park to a quiet New Hampshire lake house, Vollmer's twelve stories are at once sorrowful, exuberant, and absurdly comical.