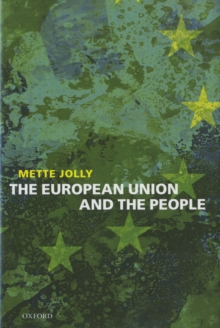 The European Union and the People Hardback

The European Union is frequently accused of having a 'democratic deficit'.

Many commentators argue that this could be remedied by increasing the powers of the European Parliament relative to those of the Council and the Commission.

The fact that the European Parliament is the only EU institution whose members are directly elected leads to the assumption that it is also the most legitimate.

The author argues that this position is based on the flawed assumption thatthe nature of the European citizenry is similar to those of the member states.

In other words, the position assumes that the union has a demos, or a people, who are prepared to accept majority outcomes even when finding themselves in the minority.

In this book the author argues that this is not thecase and that the most severe dimension of the democracy problem is not procedural, but socio-psychological.

The fact that the EU does not have a people means that establishing an EU-wide democracy based on analogies to domestic political systems is likely to lead to a further loss of democratic legitimacy. The EU can rely on output legitimacy in policy areas which do not require pan-European solidarity and identity and in which policy-making at EU-level increases efficiency and therebybenefits all citizens.

However, policy areas which require high levels of solidarity or a common identity should either remain fully within the nation states, or be subject to intergovernmental rather than supranational decision-making at EU-level.