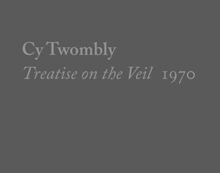 A breathtaking exploration of one of Twombly's largest paintings, the second version of his Treatise on the Veil One of the most important American postwar artists, Cy Twombly (1928-2011) engaged with mythological and poetic source material, setting him apart from other artists of his generation.

In 1970, Twombly revisited his 1968 painting Treatise on the Veil and, in a short period of focused creativity, produced a painting-Treatise on the Veil (Second Version)-on a single, 33-foot canvas along with more than a dozen related drawings. This handsomely produced oversize book features three essays that examine these works in relation to Twombly's oeuvre, contemporaneous explorations of time, the Orpheus myth, and a musical composition that Twombly cited as an influence.

Large images and details bring us in close to Twombly's magnificent meditation on time and space.