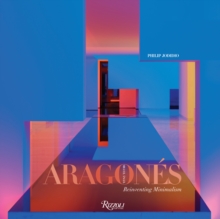 Miguel Angel Aragones has gained international attention with his spectacular private residences and buildings throughout Mexico and beyond.

This lavish volume features eleven of his stunning interiors and residences that show off his spare aesthetics and sophisticated principles of all-white, uncluttered interiors during the day that light up with cinematic neon colors at night.

Considered an important member of the Mexican and Latin American architectural vanguard, Aragones is known for his modernist sensibilities and creative use of lighting. Aragones has a knack for creating harmonious spaces in overwrought environments.

Rombo is a series of private houses located in a central, tree-lined neighborhood in Mexico City, which light up with color bursts of neon to transform the properties from day to night.

Mar Adentro is a luxury resort in Cabo San Lucas that adopts his principles with an archipelago of stark white cubes fanning toward the horizon and various platforms connected by paths that appear to float on mirrored saltwater pools. This dual-language volume will appeal to those interested in greats such as Legorreta and Barragan, as well as the Latin American school of modernism.