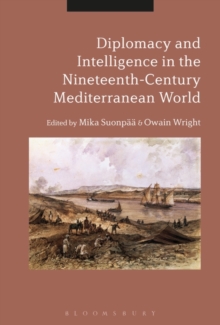 Diplomacy and Intelligence in the Nineteenth-Century Mediterranean World Hardback

Diplomacy and Intelligence in the Nineteenth-Century Mediterranean World examines the activities of diplomats in the expansion of their home country's informal imperial ambitions. Taking a comparative approach, the book combines a focus on the extension of the informal British Empire with an exploration of the imperial ambitions of other states, such as France, Austro-Hungary and Japan. The authors combine approaches from diplomatic history, intelligence history and microhistory in order to give new insights into the Mediterranean as a 'contested space' between competing informal empires. This study will be of great interest to anyone interested in the history of the Mediterranean region during the 19th century.