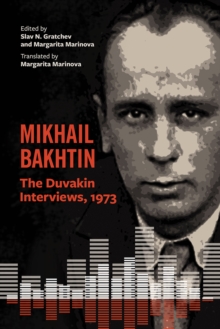 Whenever Bakhtin, in his final decade, was queried about writing his memoirs, he shrugged it off.

Unlike many of his Symbolist generation, Bakhtin was not fascinated by his own self-image.

This reticence to tell his own story was the point of access for Viktor Duvakin, Mayakovsky scholar, fellow academic, and head of an oral history project, who in 1973 taped six interviews with Bakhtin over twelve hours.

They remain our primary source of Bakhtin's personal views: on formative moments in his education and exile, his reaction to the Revolution, his impressions of political, intellectual, and theatrical figures during the first two decades of the twentieth century, and his non-conformist opinions on Russian and Soviet poets and musicians.

Bakhtin's passion for poetic language and his insights into music also come as a surprise to readers of his essays on the novel.

One remarkable thread running through the conversations is Bakhtin's love of poetry, masses of which he knew by heart in several languages.

Mikhail Bakhtin: The Duvakin Interviews, 1973, translated and annotated here from the complete transcript of the tapes, offers a fuller, more flexible image of Bakhtin than we could have imagined beneath his now famous texts.