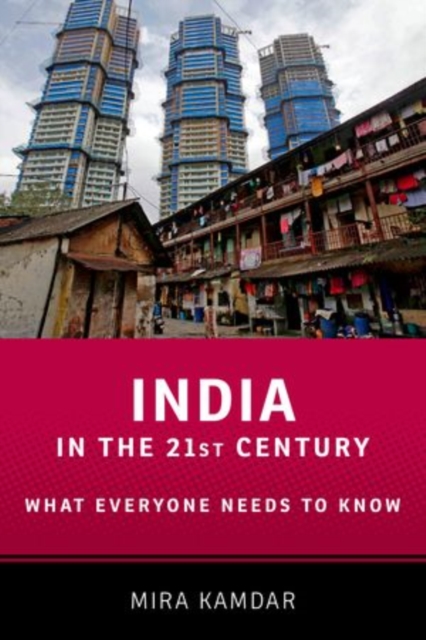 India in the 21st Century : What Everyone Needs to Know (R) Hardback

Part of the What Everyone Needs To Know (R) series

India is fast overtaking China to become the most populous country on Earth.

By mid-century, its 1.7 billion people will live in what is projected to become the world's second-largest economy after China.

While a democracy and an open society compared to China, assertive Hindu nationalism is posing new challenges to India's democratic freedoms and institutions at a time when illiberal democracies and autocratic leaders are on the rise worldwide.

How India's destinyplays out in the coming decades will matter deeply to a world where the West's influence in shaping the 21st century will decline as that of these two Asian giants and other emerging economies in Africa and Latin America rise.

In India in the 21st Century, Mira Kamdar, a former member of the New YorkTimes Editorial Board and an award-winning author, offers readers an introduction to India today in all its complexity.

In a concise question-and-answer format, Kamdar addresses India's history, including its ancient civilization and kingdoms; its religious plurality; its colonial legacy and independence movement; the political and social structures in place today; its rapidly growing economy and financial system; India's place in the geopolitical landscape of the 21st century; the challenge to India posed by climate change and dwindling global resources; wealth concentration and stark social inequalities; therise of big data and robotics; the role of social media and more.

She explores India's contradictions and complications, while celebrating the merging of India's multicultural landscape and deep artistic and intellectual heritage with the Information Age and the expansion of mass media.

With clarity and balance, Kamdar brings her in-depth knowledge of India and eloquent writing style to bear in this focused and incisive addition to Oxford's highly successful What Everyone Needs to Know (R) series.