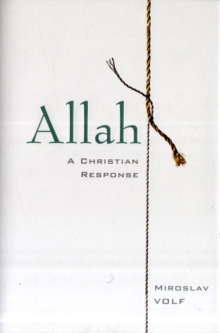 Three and a half billion people--the majority of the world's population--profess Christianity or Islam.

Renowned scholar Miroslav Volf's controversial proposal is that Muslims and Christians do worship the same God--the only God.

As Volf reveals, warriors in the "clash of civilizations" have used "religions"--each with its own god and worn as a badge of identity--to divide and oppose, failing to recognize the one God whom Muslims and Christians understand in partly different ways.Writing from a Christian perspective, and in dialogue with leading Muslim scholars and leaders from around the world, Volf reveals surprising points of intersection and overlap between these two faith traditions: - What the Qur'an denies about God as the Holy Trinity has been denied by every great teacher of the church in the past and ought to be denied by Christians today. - A person can be both a practicing Muslim and 100 percent Christian without denying core convictions of belief and practice. - How two faiths, worshipping the same God, can work toward the common good under a single government.

Volf explains the hidden agendas behind today's news stories as he thoughtfully considers the words of religious leaders and parses the crucial passages from the Bible and the Qur'an that continue to ignite passion.

Allah offers a constructive way forward by reversing the "our God vs. their God" premise that destroys bridges between neighbors and nations, magnifies fears, and creates strife.