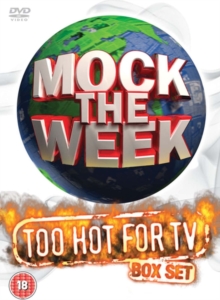 Mock the Week: Too Hot for TV Collection DVD

The compilation features regular panelists Hugh Dennis, Russell Howard, Andy Parsons and controversial Scottish comic Frankie Boyle, as well as a host of the funniest stand-up comedians on the circuit.

Often seen as edgy in even its TV version, the too hot for TV moments presented in this release are unlikely to be for the faint-hearted.