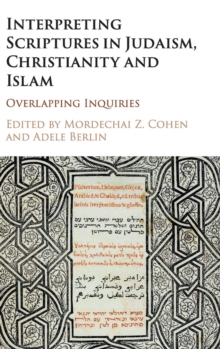 This comparative study traces Jewish, Christian, and Muslim scriptural interpretation from antiquity to modernity, with special emphasis on the pivotal medieval period.

It focuses on three areas: responses in the different faith traditions to tensions created by the need to transplant scriptures into new cultural and linguistic contexts; changing conceptions of the literal sense and its importance vis-a-vis non-literal senses, such as the figurative, spiritual, and midrashic; and ways in which classical rhetoric and poetics informed - or were resisted in - interpretation.

Concentrating on points of intersection, the authors bring to light previously hidden aspects of methods and approaches in Judaism, Christianity, and Islam.