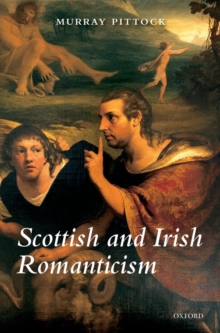 by Murray (Chair in Scottish and Romantic Literature, University of Manchester) Pittock

Scottish and Irish Romanticism is the first single-author book to address the main non-English Romanticisms of the British Isles.

Murray Pittock begins by questioning the terms of his chosen title as he searches for a definition of Romanticism and for the meaning of 'national literature'.

He proposes certain determining 'triggers' for the recognition of the presence of a national literature, and also deals with two major problems which are holding back thedevelopment of a new and broader understanding of British Isles Romanticisms: the survival of outdated assumptions in ostensibly more modern paradigms, and a lack of understanding of the full range of dialogues and relationships across the literatures of these islands.

The theorists whose works chiefly informthe book are Bakhtin, Fanon and Habermas, although they do not define its arguments, and an alertness to the ways in which other literary theories inform each other is present throughout the book. Pittock examines in turn the historiography, prejudices, and assumptions of Romantic criticism to date, and how our unexamined prejudices still stand in the way of our understanding of individual traditions and the dialogues between them.

Chapters 3 and 4 discuss the Scottish andIrish public spheres in the later eighteenth century, together with the struggle for control over national pasts, and the development of the cults of Romance, the Picturesque and Sentiment: Macpherson, Thomson, Owenson and Moore are among the writers discussed.

Chapter 5 explores the work of RobertFergusson and his contemporaries in both Scotland and Ireland, examining questions of literary hybridity across not only national but also linguistic borders, while Chapter 6 provides a brief literary history of Burns' descent into critical neglect combined with a revaluation of his poetry in the light of the general argument of the book.

Chapter 7 analyzes the complexities of the linguistic and cultural politics of the national tale in Ireland through the work of Maria Edgeworth, while thefollowing chapter considers of Scott in relation to the national tale, Enlightenment historiography, and the European nationalities question.

Chapter 9 looks at the importance of the Gothic in Scottish and Irish Romanticism, particularly in the work of James Hogg and Charles Maturin, while Chapter 10,'Fratriotism', explores a new concept in the manner in which Scottish and Irish literary, political and military figures of the period related to Empire.