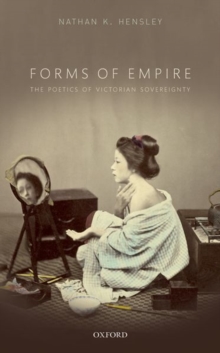 Forms of Empire : The Poetics of Victorian Sovereignty Paperback / softback

Forms of Empire shows how the modern state's anguished relationship to violence pushed writers to expand the capacities of literary form.

The Victorian era is often imagined as an 'age of equipoise,' but the period between 1837 and 1901 included more than 200 separate wars.

What is the difference, though, between peace and war?

The much-vaunted equipoise of the nineteenth-century state depended on physical force to guarantee it.

But the sovereign violencehidden in the shadows of all law shuddered most visibly into being at the edges of law's reach, in the Empire, where emergency was the rule and death perversely routinized.

George Eliot, Charles Dickens, Wilkie Collins, A. C. Swinburne, H. Rider Haggard, and Robert Louis Stevenson, among others, all generatednew formal techniques to account for the sometimes sickening interplay between order and force in their liberal Empire.

In contrast to the progressive idealism we have inherited from the Victorians, these writers moved beyond embarrassment and denial in the face of modernity's uncanny relation to killing.

They sought aesthetic effects-free indirect discourse, lyric tension, and the idea of literary 'character' itself-able to render thinkable the conceptual vertigoes of liberalviolence.

In so doing, they touched the dark core of our post-Victorian modernity.

Archival work, literary analyses, and a theoretical framework that troubles the distinction between 'historicist' and 'formalist' approaches helps this book link the Victorian period to the present and articulate a forceful vision ofwhy literary thinking matters now.