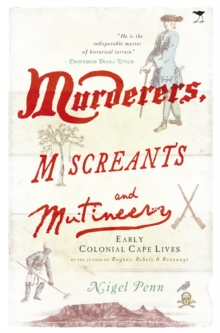 This work is the long-awaited sequel to the historian Nigel Penn's award-winning book Rogues, Rebels and Runaways, in which he entertained and informed readers with stories of the lives of some remarkable characters from early Cape history.

In this new volume Penn, a consummate raconteur and storyteller, brings to life an assortment of extraordinary personalities from the eighteenth and early nineteenth centuries.

There is Maria Mouton, the first white woman at the Cape to be executed, for her adulterous affair with a slave and the murder of her husband.

Then, too, there is Johannes Seidenfaden, an LMS missionary whose 'enormities' so shocked Dr John Philip, the LMS superintendent, that he branded him 'a wolf in sheep's clothing' (Seidenfaden, a married man, had not only attempted to seduce his Khoikhoi housekeeper on five occasions but also turned his mission station of Suurbraak, just outside Swellendam, into his own personal fiefdom and impoverished all the Khoikhoi inhabitants.)Other chapters tell stories of desertion by ill-treated soldiers in Cape Town, who intended to escape to Mozambique but got no further than the Hottentots Holland Mountains, where they were apprehended before being hanged; the escapades of the Swiss Meuron Regiment at the Cape; and the 'ear atrocity' in the Onder Bokkeveld near Ceres.

These remarkable stories, told with elan, erudition and humour, throw light on our extraordinary past and reveal much about social relations and human experience in the early Cape colony.