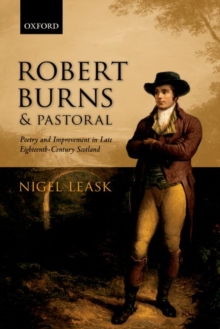 Robert Burns and Pastoral is a full-scale reassessment of the writings of Robert Burns (1759-1796), arguably the most original poet writing in the British Isles between Pope and Blake, and the creator of the first modern vernacular style in British poetry.

Although still celebrated as Scotland's national poet, Burns has long been marginalised in English literary studies worldwide, due to a mistaken view that his poetry is linguistically incomprehensible andof interest to Scottish readers only.

Nigel Leask challenges this view by interpreting Burns's poetry as an innovative and critical engagement with the experience of rural modernity, namely to the revolutionary transformation of Scottish agriculture and society in the decades between 1760 and 1800, therebyresituating it within the mainstream of the Scottish and European enlightenments.

Detailed study of the literary, social, and historical contexts of Burns's poetry explodes the myth of the 'Heaven-taught ploughman', revealing his poetic artfulness and critical acumen as a social observer, as well as his significance as a Romantic precursor.

The book offers fresh interpretations of all Burns's major poems and some of the songs, the first to do sosince Thomas Crawford's landmark study of 1960.

It concludes with a new assessment of his importance for British Romanticism and to a 'Four Nations' understanding of Scottish literature and culture.