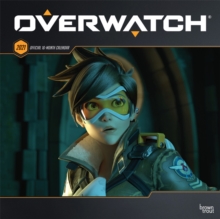 Overwatch, Blizzard's universally acclaimed multiplayer game, is an action-packed adventure set in the not-so-distant future, after a fierce battle between humans and robots. Named for the peace-keeping task force dedicated to protecting humanity, Overwatch offers a full range of playable characters including men, women, robots, and even a gorilla. Indulge in your inner hero with this wall calendar showcasing images from one of the greatest video games of all time.