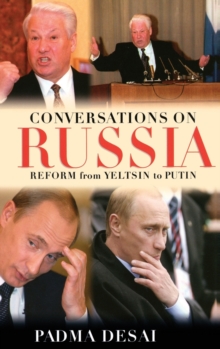 Conversations on Russia : Reform from Yeltsin to Putin Hardback

Much of the discussion of Russia's recent post-Communist history has amounted, both in Russia and the West, to a series of monologues by strong-minded people with starkly divergent views.

In contrast, Padma Desai's conversations with influential, intelligent participants and observers provide the reader with a broad, nuanced view of what has and has not happened in the last fourteen years, and why.

Conversations from Russia will thus serve as a much-neededreference volume, both for academics who study Russia and for laypeople who only have vague perceptions of what has occurred in Russia since the collapse of Communism. In conversations with important figures like Boris Yeltsin, George Soros, Anatoly Chubais, and Yegar Gaidar, Desai considers questions like why the Soviet Union fell apart under Gorbachev, what went wrong with economic reforms after Gorbachev, whether the privatization of Russian assets could have been managed differently, and what the prospects are for the Russian economy in the near future.

Desai, a recognized expert in the field of Soviet studies, ties the interviews together with anintroduction, ultimately reaching her own judgment on each issue considered in the conversations.

This book will appeal to researchers and students in developmental economics, political economy, and Soviet studies, and educated laypeople interested in Russia.