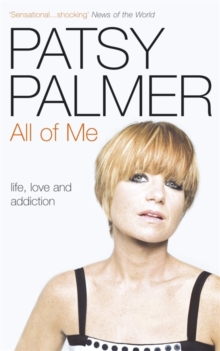 All of Me Paperback / softback

When Patsy Palmer landed the part of Bianca on EastEnders at the age of 16, it was a dream come true for a girl who'd grown up in Bethnal Green longing for stardom.

Money, fame and lots and lots of parties were soon part of daily life and it wasn't long before Patsy was addicted to hedonism and then drowning in sea of drugs and drink.

She had her first baby when she was 19 but nothing really slowed down the self-destructive spiral of substance abuse.

It wasn't until much later, after near death encounters and relationship breakdown with the family she adored but who were also troubled with drug problems and mental health issues, that Patsy found her way to stop.

These days she is happy and healthy but getting there was a struggle that nearly cost her her kids, her marriage and her life.

ALL OF ME is the scrupulously honest account of how Patsy decided to choose life and in so doing, finally found out who she really was.