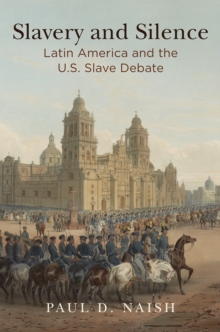 In the thirty-five years before the Civil War, it became increasingly difficult for Americans outside the world of politics to have frank and open discussions about the institution of slavery, as divisive sectionalism and heated ideological rhetoric circumscribed public debate.

To talk about slavery was to explore-or deny-its obvious shortcomings, its inhumanity, its contradictions.

To celebrate it required explaining away the nation's proclaimed belief in equality and its public promise of rights for all, while to condemn it was to insult people who might be related by ties of blood, friendship, or business, and perhaps even to threaten the very economy and political stability of the nation. For this reason, Paul D. Naish argues, Americans displaced their most provocative criticisms and darkest fears about the institution onto Latin America.

Naish bolsters this seemingly counterintuitive argument with a compelling focus on realms of public expression that have drawn sparse attention in previous scholarship on this era.

In novels, diaries, correspondence, and scientific writings, he contends, the heat and bluster of the political arena was muted, and discussions of slavery staged in these venues often turned their attention south of the Rio Grande. At once familiar and foreign, Cuba, Brazil, Haiti, and the independent republics of Spanish America provided rhetorical landscapes about which everyday citizens could speak, through both outright comparisons or implicit metaphors, what might otherwise be unsayable when talking about slavery at home.

At a time of ominous sectional fracture, Americans of many persuasions-Northerners and Southerners, Whigs and Democrats, scholars secure in their libraries and settlers vulnerable on the Mexican frontier-found unity in their disparagement of Latin America.

This displacement of anxiety helped create a superficial feeling of nationalism as the country careened toward disunity of the most violent, politically charged, and consequential sort.