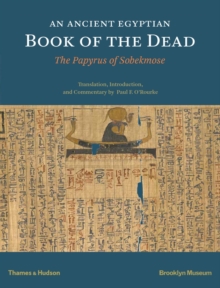 An Ancient Egyptian Book of the Dead : The Papyrus of Sobekmose Hardback

Such `books' - papyrus scrolls - were composed of traditional funerary texts, including magic spells, that were thought to assist a dead person on their journey into the afterlife.

The ancient Egyptians believed in an underworld fraught with dangers that needed to be carefully navigated, from the familiar, such as snakes and scorpions, to the extraordinary: lakes of fire to cross, animal-headed demons to pass and, of course, the ritual Weighing of the Heart, whose outcome determined whether or not the deceased would be `born again' into the afterlife for eternity. This publication is the first to offer a continuous English translation of a single, extensive, major text that can speak to us from beginning to end in the order in which it was composed.

The papyrus itself is one of the longest of its kind to come down to us from the New Kingdom, a time when Egypt's international power and prosperity were at their peak.

This new translation not only represents a great step forward in the study of these texts, but also grants modern readers a direct encounter with what can seem a remote and alien civilization.

With language that is, in many places, unquestionably evocative and very beautiful, it offers a look into the mindset of the ancient Egyptians, highlighting their beliefs and anxieties about this world as well as the next.