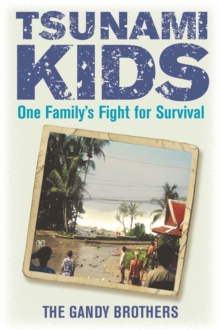 Tsunami Kids : Our Journey from Survival to Success Paperback / softback

Aged from 8 to 17, they subsequently faced a harrowing and solitary 200km trek across the decimated country to get home to safety. The bravery, ingenuity and resilience they displayed was the result of their unusual upbringing.

Taken out of school at a young age, they received an unconventional and global education, learning independence and resourcefulness while carrying out voluntary work for charities in India alongside their parents. In the decade since the tsunami, Rob and Paul have created a multinational brand, Gandys Flip Flops, which was based in the front room of their rented flat and has been endorsed by entrepreneurs including Richard Branson, and set up Orphans for Orphans, a charitable organization that supports children deprived of education, nutrition and medication. This is a heartbreaking, engaging but ultimately uplifting journey from the streets of Sri Lanka to the boardrooms of London, Downing Street and beyond as told by two inspirational survivors.