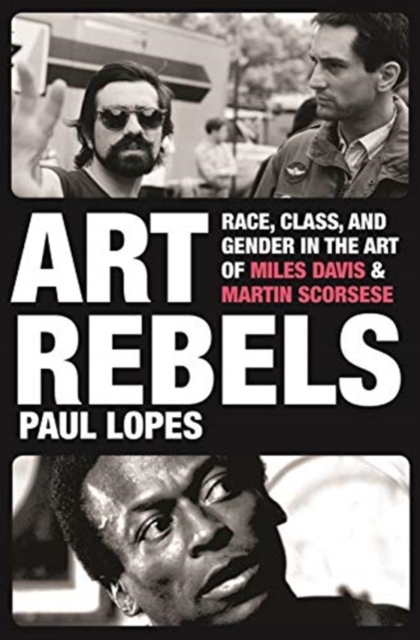 Art Rebels : Race, Class, and Gender in the Art of Miles Davis and Martin Scorsese Hardback

Across the arts, artists rebelled against traditional conventions, embracing a commitment to creative autonomy and personal vision never before witnessed in the United States.

Paul Lopes calls this the Heroic Age of American Art, and identifies two artists-Miles Davis and Martin Scorsese-as two of its leading icons. In this compelling book, Lopes tells the story of how a pair of talented and outspoken art rebels defied prevailing conventions to elevate American jazz and film to unimagined critical heights.

During the Heroic Age of American Art-where creative independence and the unrelenting pressures of success were constantly at odds-Davis and Scorsese became influential figures with such modern classics as Kind of Blue and Raging Bull.

Their careers also reflected the conflicting ideals of, and contentious debates concerning, avant-garde and independent art during this period.

In examining their art and public stories, Lopes also shows how their rebellions as artists were intimately linked to their racial and ethnic identities and how both artists adopted hypermasculine ideologies that exposed the problematic intersection of gender with their racial and ethnic identities as iconic art rebels. Art Rebels is the essential account of a new breed of artists who left an indelible mark on American culture in the second half of the twentieth century.

It is an unforgettable portrait of two iconic artists who exemplified the complex interplay of the quest for artistic autonomy and the expression of social identity during the Heroic Age of American Art.