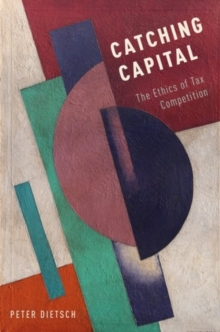 Rich people stash away trillions of dollars in tax havens like Switzerland, the Cayman Islands, or Singapore.

Multinational corporations shift their profits to low-tax jurisdictions like Ireland or Panama to avoid paying tax.

Recent stories in the media about Apple, Google, Starbucks, and Fiat are just the tip of the iceberg.

There is hardly any multinational today that respects not just the letter but also the spirit of tax laws.

All this becomes possible due to taxcompetition, with countries strategically designing fiscal policy to attract capital from abroad.

The loopholes in national tax regimes that tax competition generates and exploits draw into question political economic life as we presently know it.

They undermine the fiscal autonomy of politicalcommunities and contribute to rising inequalities in income and wealth. Building on a careful analysis of the ethical challenges raised by a world of tax competition, this book puts forward a normative and institutional framework to regulate the practice.

In short, individuals and corporations should pay tax in the jurisdictions of which they are members, where this membership can come in degrees.

Moreover, the strategic tax setting of states should be limited in important ways.

An International Tax Organisation (ITO) should be created to enforce the principles oftax justice. The author defends this call for reform against two important objections.

Second, he argues that regulation of this sort, rather than representing a constraint on national sovereignty, in fact turns out to be a requirement of sovereignty in a global economy.

The book closes with a series of reflections on the obligations that the beneficiaries of tax competition have towards the losers both prior to anyinstitutional reform as well as in its aftermath.