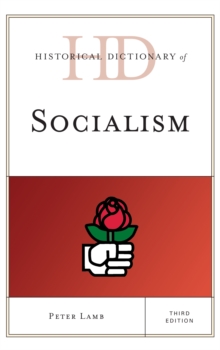 Part of the Historical Dictionaries of Religions, Philosophies, and Movements Series series

Socialism has been an influential force for social change for almost two centuries.

Its philosophy and ideology have inspired millions while simultaneously arousing fear and revulsion in its enemies.

Having emerged after the French Revolution in the effort to build upon and develop the egalitarian ideas of the Enlightenment, socialism has taken many forms.

It has, furthermore, sometimes been manipulated and reformulated by opportunists who have built authoritarianism and totalitarian dictatorships in its name.

Opponents seize on such examples to frighten away people who may otherwise have found socialism attractive.

Socialism has survived such criticism and misrepresentation as its core principles have struck a chord with generations of people concerned with social justice. This third edition of Historical Dictionary of Socialism contains a chronology, an introduction, a glossary, and an extensive bibliography.

The dictionary section has over 500 cross-referenced entries on activists, politicians, political thinkers, political parties and organizations, and key topics, concepts, and aspects of socialist theory..

This book is an excellent access point for students, researchers, and anyone wanting to know more about the Socialism.